Adolf Stuehff was one of the last remaining from the old family of the Stecknitz boatmen, who used to bring the so-called "white gold of the middle ages" – salt – from Lueneburg near the Elbe River to Luebeck by means of the Canal.

He was born and raised in the quarter lying below Luebeck’s ancient cathedral, at the upper Trave River. Just like all his Ancestors, Adolf Stuehff is a true sailor.

-  at first he went to sea, serving as a ship’s cook and making his way up to become a captain of coastal navigation.

-  then he went on to do inland navigation.

He obtained his patents for inland navigation and sailed on Europe’s inland waterways with various ships of his own. Almost all of those ships had names with a connection to his hometown of Luebeck: e.g.. "Muehlendamm", "Muehlentor", "Kaisertor" and "Holstentor".

Being a real "Captain’s wife" Gabriele Stuehff obtained her own patents and became a captain of inland navigation herself.

As they are both faithfully connected to water, shipping and Luebeck, Adolf and Gabriele Stuehff planned the realization of their dream:

-  they wanted to offer trips around Luebeck and into Luebeck’s surrounding on historical launch boats.

Thus Adolf Stuehff came back to his roots, as our jetty is nowadays situated about a stone’s throw away from where he was born, in Luebeck’s "Marlesgrube".

In earlier years the annual fair would have taken place in the street "An der Obertrave", now you find our jetty just there.

Our profession is our call – nothing better than that, is there? 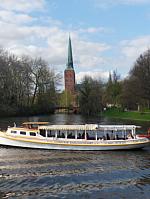 This launch boat was built at the Vulcan-Werft in Stettin in 1940, it was used as a neat senate launch boat and made its trips around Luebeck under the name of "Luba". Through the years the "Gaby Stuehff" became Luebeck’s official tugboat and was then sold in the 1980ies. The boat was taken to the River Ilmenau under the name "Stint", later it travelled on the Havel in Brandeburg as the "Havelnixe". We brought her back home to Luebeck and restored her, investing a lot of love and work into her historical details.

The launch boat "Adolf Stuehff" was built in the Wolkau-Werft in Hamburg in 1964, in the beginning it was used for transporting people or tugging boats. The boat carried the name "Karl-Heinz" and travelled in Hamburg’s harbor area until we bought it in 2005.

Because of ist strong engine and very good robustness it was mainly used as a tugboat.